Contact the selected supplier at least one month early to establish a convenient time and agree on the terms of your project.

We started activity in Jarkowice which mainly deals with the production of steel structures.

Moved activity to Łomnica with a production plant in Stara Kamienica and expanded the range of services of the sawmill industry and the production of wooden packaging.

1994 A breakthrough in activity - we started export packagining, and KADOR became a guest member of the HPE.

As Kador GmbH we became an official member of the German HPE association, which brings together wooden packaging manufacturers and companies offering packaging services.

We finished construction of a new plant and transfer all activity from Stara Kamienica to Miłków where we created our headquarters.

Since lumber is the main material for the prefabrication of wooden packaging, for the safety of our customers we bought ZPD Człopa (near Poznań).

New Kador branch is opened in Elbląg. We opened a new packaging hall in Miłków which increases our capabilities.

We took over ZPD Człopa which has since then existed as KADOR.

We set up and build our new plant in Magnitogorsk, Russia.

We obtained the status as a Registered Agent (PL/RA/00038-01) and were awarded the title “Gazele Biznesu” ("Business Gazelles".)

We build a new plant in Gliwice and we launched our online shop.

Cannot find the information you need?

Ask a question
(we will respond within 24 hours) 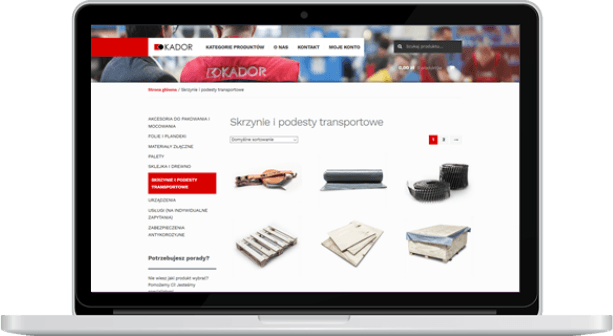